The Plot to Destroy the United States

The American Civil War continues. Those who are weakening the Federal government (aka "deep state") are giving aid and comfort to the enemies of the United States by bankrupting the country while dismantling Federal agencies (with special emphasis on environmental agencies).

What is being done to destroy the US in the 21st century? Take a look around. If you see something, say something. Giving this conspiracy enough light and fresh air may yet stop it before widespread armed conflict (beyond what we have already experienced) resumes.


The American Civil War never ended. In the 21st century, there are people who are attempting to destroy the Union while misrepresenting the Confederate States of America as a worthy cause.


WHO? You can identify these folks by their deeds, a few of which are enumerated below:

1. Confederates steadfastly oppose the federal government's efforts to generate income by consistently railing against taxes. (Taxes and fees are the only way governments have of obtaining funds for their operation.) No tax is low enough. Encouraging Federal bankruptcy, they attack the agency the Federal government uses to collect taxes, the Internal Revenue Service.


2. They attempt to destroy Federal Agencies in order to sabotage the federal government's ability to serve the American people.. They appoint saboteurs (including but not limited to "acting" Agency heads to avoid US Senate confirmation) to infiltrate Federal agencies so that these agencies work against their own goals while leaving some agencies understaffed or not staffed at all.

3. Conspirators employ gossips to spread rumors.
"Fake news" is one such rumor. They develop "news" outlets to regurgitate Confederate propaganda, which they call "alternative facts."


... At the same time, Confederates attack legitimate efforts to report facts by attempting to destroy the reputations of all news sources that disagree with their narrative.

5. Confederates oppose American democracy. They do so by carefully crafting state laws in such a way as to prohibit voting by certain specific groups. At the same time, Confederates attempt to sap the voting power of Union supporters by manipulating the boundaries of Federal voting districts.


6. In an attempt to resume the armed phase of the Civil War, Confederates discourage any attempt by Americans to peaceably assemble to protest against anything. Peaceful protest is discredited or denied and the voice of the electorate is stifled.


Confederates give winks and nods of approval to the violent groups of disrupters they secretly fund. Confederate conspirators hope Americans will cease to vote with their ballots and will instead "vote" with their guns. Some already have. 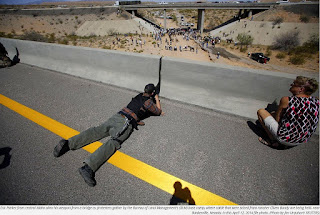 7. Confederate advocates for secession and the resumption of armed insurrection are among the ardent, paid salespeople for the arms industry's current efforts to expand sales by selling guns that are specially designed to kill as many humans as quickly as possible and are attempting to funnel Federal Union military hardware to local Sheriffs as well as the general population. Their objective here is clear. Confederate forces are encouraging the use of these weapons against Federal agents and Union supporters. From cowardly ambush, Federal agents have been hunted as game animals.

What should I do?
1. Think for yourself. Do not accept this conspiracy theory or any other without questioning its foundations.

2.  Question the "isms." Socialism, Catholicism, Creationism, Communism, offer "answers" and camaraderie. Their price for admission, however, is your acceptance of doctrine and restrictions on your thinking. Oaths, secret handshakes and "laws" have to be memorized. Your conduct will be judged by your fellow "ism" members and most often found wanting.

3. Learn how to distinguish fact from fiction. Both current events and history have multiple interpretations, but in order to make sense, these various ways of looking at events must agree on the events themselves. Review multiple sources before concluding that you know what is going on.

4. Embrace your friends and those who agree with you, but listen and learn from both the opinions and tactics of those who oppose your point of view.

5. Express yourself in writing. Writing disciplines the mind. It clarifies thinking in a way that verbal expression cannot. You will find you are your own toughest critic!

6. Be brave! Share your opinions. Though it seems far-fetched, your Congressional representatives are there to serve you. Let them hear your voice! No need to be bashful. Intelligence is not something for which these folks are noted. They are not smarter than you are. They just want you to think they are.

7. Think ahead. The future may be bleak, but you have options. Limit your debt. Own property. Save money any way you can. Educate yourself or get a formal education so that your educational efforts are formally recognized.

8. Outwit your enemies. Don't waste your time hating them. Use your time instead to strategize, publicize and organize. Your enemies are people, too!